“Unmarried teens would jump off bridges”: NY Times on suppression of home tests 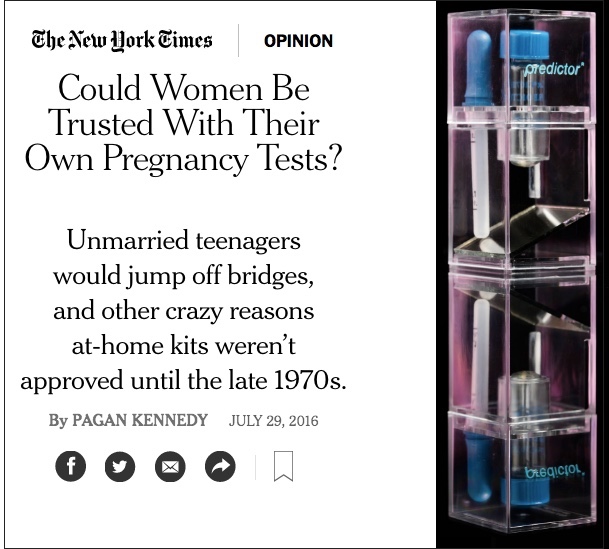 A large part of the Society for Participatory Medicine’s work is culture change, and that requires pointing to the cultural roots of today’s situation, so that well-meaning people today can understand how we got here, and how absurd today will look in the future. I’ve rarely seen a better example than in today’s New York Times op-ed by Pagan Kennedy, who is known (among many other things) for her writings about world-changing inventions.

As the screen capture at right suggests, the underlying myth was “Patients can’t handle the truth.” It exactly echoes physician sentiment about patient access to medical records via OpenNotes, as we’ve often written.

But “knowledge is power,” as Sir Francis Bacon said centuries ago, as SPM co-chair Dr. Danny Sands often cites in his speeches. And lo and behold, some patients want knowledge and the power it brings.

The column tells how in 1967 Margaret Crane imagined, and developed, a home pregnancy test(see photo above) that mimicked what her employer sold, and how the company thought it was a terrible idea. If you have online access to the Times, read it; if you don’t, here are some tidbits:

The company’s market was doctors, and doctors would hate this product that made their services seem less necessary.

This reminds us of the travails of SPM member and ICD patient Hugo Campos, who wants his device data – but its maker Medtronic says, “You’re not our customer – the doctor is.” And:

[Crane’s] managers seemed terrified by scenarios in which hysterical women killed themselves. “What if a senator’s daughter, unmarried, found she was pregnant and jumped off a bridge?” one asked.

Ah, we see: your company is the priority. And:

Pharmaceutical companies were afraid of antagonizing doctors and aligning themselves with the “fast women” who desired a fast test.

Of course, not a soul expressed concern about the men involved with those “fast women,” much less their responsibility for any panic experienced by that imagined senator’s daughter. That’s a rant for another day, but it does echo our previous posts on our movement’s parallels with feminism.

Our point here is that Crane saw that the patient would want the product, but the business managers were decisively more interested in what their customers (the doctors) wanted.

If you don’t have Times access, Eric Topol (author of The Patient Will See You Now) tweeted photos of the article, calling it “A dark example of how the medical profession underrates human beings.” (Thanks, Eric, for drawing our attention to this!)

This is Kennedy’s second article about the invention of the home pregnancy test. As today’s column notes, when she first wrote about it in 2012, the real inventor (Crane) wasn’t known yet, but she stepped forward and contacted Kennedy.

Wonderfully, the Smithsonian Institution has since purchased that original prototype. So the vision of that 26 year old woman has a rightful place in history, and the patient perspective has prevailed – despite the views of the men who felt that their company’s needs were more important.