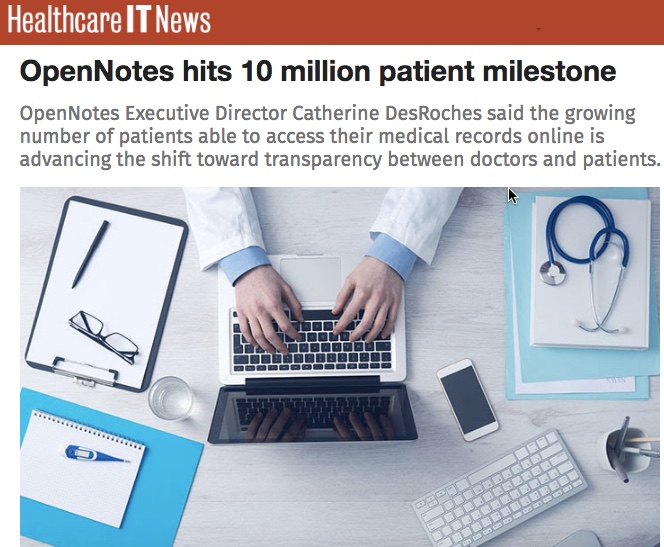 As regular readers know, for years we’ve been blogging here about OpenNotes, in which patients and their designated caregivers can read every word their clinicians write, so they can be more informed. The OpenNotes tagline, “Doctors and patients on the same page,” is no joke: I was one of the subjects in the study, and I’ve blogged about visits with and without OpenNotes. With is better.

I mean, would you hold any other kind of important meeting in life with no access to the records of what happened, what was decided, and who’s going to do what??

This is not just an outer-space crazy idea; in its major 2012 report Best Care at Lower Cost, the Institute of Medicine wrote that “patient-clinician partnerships” with “engaged, empowered patients” are a cornerstone of the future of care.  How do we do that? Well, in his keynote speeches and grand rounds lectures, SPM co-chair Dr. Danny Sands says “How can patients participate if they can’t see what I see??”

We blogged about the first million patients, and in December we blogged about the new move that will bring OpenNotes to fifty million in the coming years. (That’s 20% of American patients!)  Read Bill Siwicki’s Healthcare IT News piece on the 10 million patient milestone … and watch this compelling video of two e-patients who altered the course of their own brain cancer cases(!!!) because they had access to their data … so they could help. (Update: see Liz Salmi’s comment below on how she does not have access to OpenNotes, and she wants it!)

When crisis hits your family, won’t you want to have this, so you can help, as Vice President Biden described about his own son’s death last year? Do your providers offer it? Ask them now, because although OpenNotes isn’t a for-sale product (it’s just a software switch), these things take time.

Be empowered and engaged – ask now: “Do you have OpenNotes? I’d really like to have it. Whom do I talk to, to file a request?”

And spread the word!