Home » General » How many tries does it take to flip a physician?

How many tries does it take to flip a physician?

Watching physicians pivot from ‘More is Better’ to ‘Less is More’

For British cardiologist David Warriner it all began when he was a trainee MD and it was his job to organize the daily tests ordered on the ward. Time and again he found himself filing the same “normal” results from redundant sets of routine screens. Aware of tight resources even then during training, he wondered why it was customary to have so many expensive scans for patients who had no evidence of brain injury or disease.

As I listened to him speak, I thought the most likely reason for all those tests was simply “because we can.” Warriner was in training back when just-in-case medicine was still at its peak, clinicians rarely asked about costs and patients rarely questioned physicians.

I remember similar feelings from my own life around the same time. A want-to-be helpful MD who seemed to come from the same “More is Better” school of medicine apparently hoped to impress new-patient me. I had to resist advice to decline a suggestion that my mild hip pain was worth an MRI. For years thereafter, the science writer in me repeatedly felt obliged to protect and defend from added hassle and cost, such as when a PCP suggested I get an endoscopy to check on a scratchy windpipe. For reasons I will unpack another time, the drive to reduce overtreatment became a very important cause to me.

One of my favorite “less is more” medical pundits today, Rita Redberg MD, remembers her training days too. A mentor-professor in med school sensitized her to “excess medicine” and expressed chagrin at the indifference of peers, but that mentor was largely alone. It was still an era when an intern might be chastised for skipping a test, but was almost never challenged for adding one, and nobody asked about cost. It sounded like a competitive form of ‘medical machismo’ to me, foreshadowing the time when “Dr. House” would become king of his own brand of More is Better medicine on TV.

Fast forward to today, Dr. House has largely scrolled out of mind, and as I start this post, both physicians above have finished keynoting at an international conference in Quebec aimed at reducing “excess” treatments and tests and promting the movement towrds “less is more” medicine. Coincidentally, I am tuning into it all because I have just joined a team for the “Choosing Wisely” campaign run by Consumer Reports, a co-sponsor at the same conference.

Today, both Redberg and Warriner are popular spokespeople in the global campaign to reduce overtreatment in medicine. Dr. Redberg is now a medical school professor herself, at UCSF in San Francisco, as well as editor of the esteemed journal JAMA Internal Medicine, while David Warriner, a key organizer at Quebec, is a leader in the UK branch of Choosing Wisely and has just taken a post as Divisional Director for the BHR hospitals  in London.

The Value of Virtual Visits
Last post, I did a small spoof and let readers think for a bit that I was actually there in Quebec, listening. Then I confessed that I was only present in the virtual sense. This time around, I will confess up front that I never had a chance to hear either Rita Redberg or David Warriner speak last week, although I did get to hear them each in podcasts later. But I did “attend” Quebec and I did “meet” some participants live, helped by those who were present and sharing online in real time.

I find healthcare conferences to be especially magnetic online since they are typically full of participants adept at healthcare social media (#hcsm) and they tend to keep a steady stream of lively updates flowing. This is quite helpful to folks at a distance, including journalists like me, who always want to hear more from the front lines.

When I invited you join me last week in a visit to the event in Quebec, I hoped to make it vivid enough you could almost smell the croissants. My aim was to underline how inclusive even a virtual visit can feel, especially if it results in a front row seat in a place you’d like to go hearing from people who have the latest news about things you want to know. 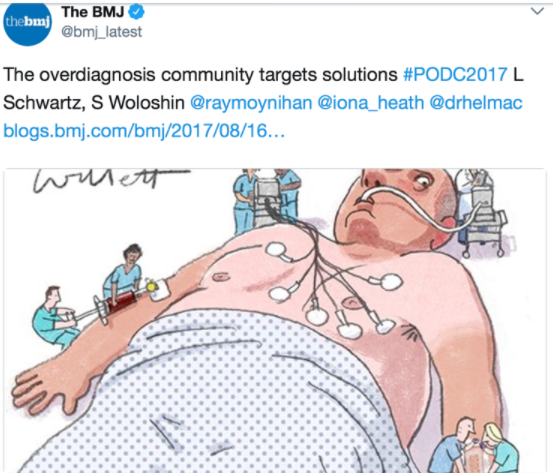 To attend the event in Quebec in the virtual sense, I just needed to point my Twitter account to the conference hashtag (#podc2017) to see a long, busy stream of updates filled with facts, figures, pictures, quotes and jokes between participants, such as the BMJ ‘toon from one Twitter “peep” featured above.

As you click on their links and watch their chatter, you also get a sense of their personalities as doctors, scientists, professors and policy makers, and this gives the topics their own sense of personality too.

It really was almost like being there, minus the croissants. 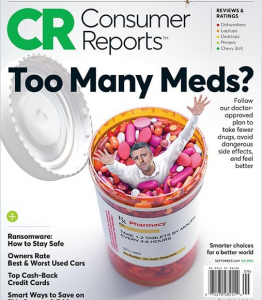 Unwinding the Harms and Flipping the Physicians
The event in Quebec was called “Preventing Overdiagnosis 2017: Unwinding the harms of too much medicine” and it is part of an ongoing global effort aimed at reducing unnecessary prescriptions, tests and medical treatments worldwide. Participants came from as far as Australia and India.

The timing was also complimentary with the current cover of Consumer Reports here in the states. It asked if we Americans are “overdosing on healthcare” with too many tests and too many meds resulting in runaway costs we now feel helpless to stop.

Using outdated protocols is a larger problem than you might think if you don’t work In healthcare. It can take years for awareness of new findings to spread and even more time for culture to shift and behavior to change on the front lines.

How many flips between Welby and House?
I raised similar questions when I hosted a local workshop as a “patient activist” assisting the Choosing Wisely effort. How much time did it take for us to move from Marcus Welby and Dr. Kildare to Dr House, I asked the participants, and what might it take to unwind the ‘more is better’ mindset?

To answer that it might help to take quick look back before we look ahead.

Several threads came together last decade to make overtreatment a fairly well-known cause today. First, we had finally compiled enough outcomes data to compare the long term effects of many different tests and treatments. As we saw the real results take shape, we began to pivot away from medicine based on belief towards medicine based on evidence.

Aided by academic centers assessing data and books by respected authors such as policy expert Shannon Brownlee  (Overtreatment, 2007) and physician Gilbert Welch of Dartmouth (Overdiagnosis, 2011) awareness grew, not just among physicians, but in the public mind.

As shown in this slide I made for a Choosing Wisely workshop, it has since become common to question many aspects of conventional wisdom in medicine. It has also become almost routine to engage patients in such conversations too, as foreshadowed by the picture of “Doc Tom” Ferguson below, the founder of @S4PM, home of this blog, and father of the “e-patient” movement that is still going strong today. 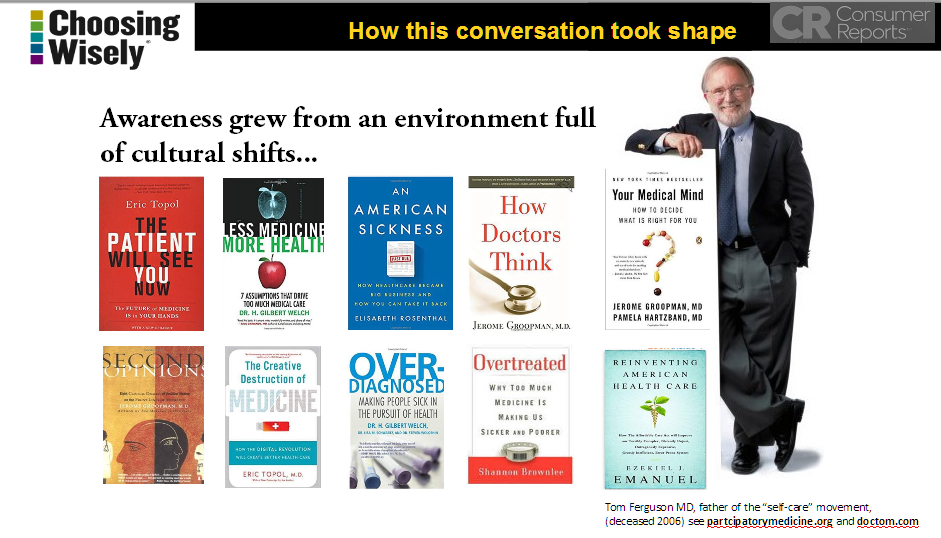 Against this changing backdrop of evolving opinion, enter the Choosing Wisely campaign, in which the American Board of Internal Medicine (ABIM) has joined with Consumer Reports on a mission to raise public awareness and reduce overtreatment.

The initial ABIM strategy was to work peer to peer, doctor to doctor, and that first wave began in 2012 by asking several specialty groups to come up with lists of procedures that should no longer be routine. Successive waves of updates followed, the consensus lists grew, and by 2013, the information was aimed at health consumers too, via Consumer Reports and its companion site at consumerhealthchoices.org. 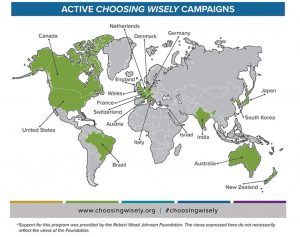 At the same time, the movement spread to several countries abroad as shown in the map at left. Clearly the themes of reducing health risk and enhancing benefits echo across many boundaries, even if specifics will vary depending on local needs and preferences. But guided by a shared set of principles, physician leaders in multiple countries have agreed on their top 10 recommendations from a list of more than 1,000 medical practices that have the most potential to harm patients. Coming to international consensus on these 10 priority issues was a significant accomplishment. 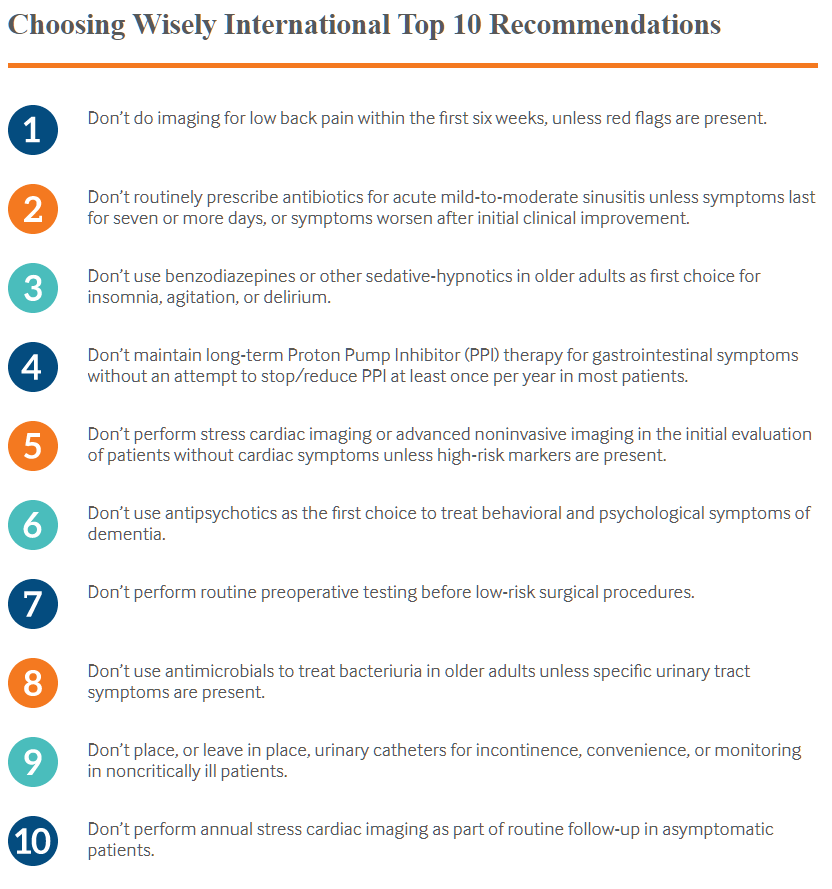 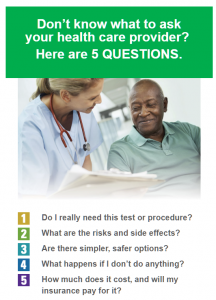 Rather than commit that longer list to memory, it may be easier to simply recall the Top Five questions that the Choosing Wisely team suggests you ask your MD when a new test or treatment comes up.

Closing Thoughts, plus a Tease
Are you curious about  other findings from Quebec such as how to engage with patients or motivate physicians to listen and change?

I was curious too and will be happy to share more of that detail next visit. After the holiday I wil add Chapter Three to this series, including an interesting look at the various ways some parties have taken our names in vain, ascribing multiple meanings over the years to popular terms such as “patient-centric.”

On that point, let me end with a teasing hint, close this post with a smile and share another cartoon from the social media stream at Quebec: 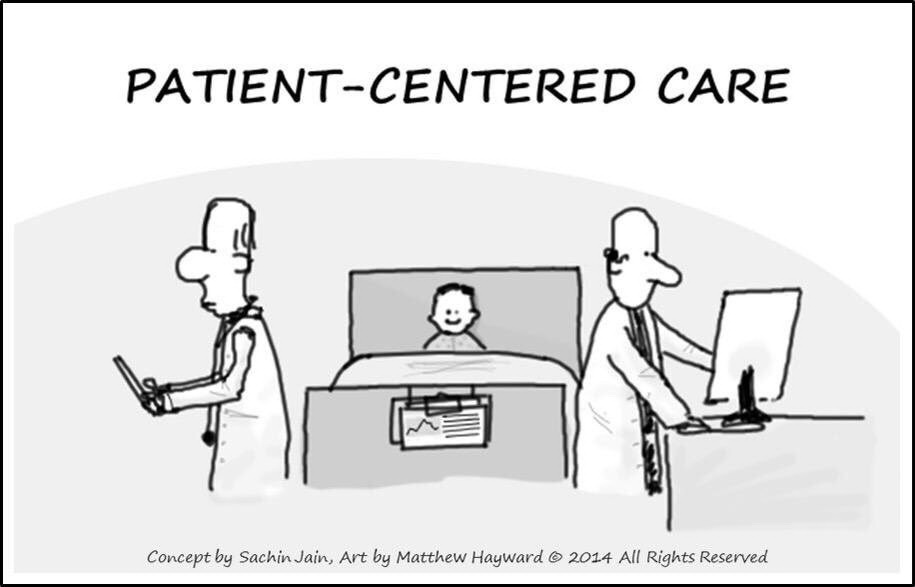 And meanwhile, if you are wondering, it may take only one try to flip a physician — if he is open to change.