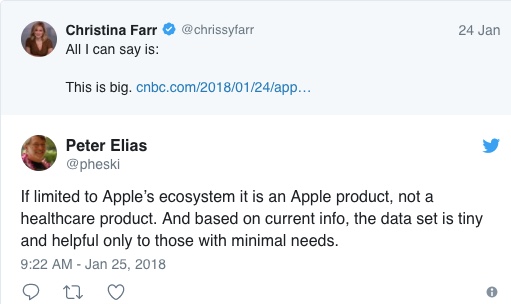 The health IT sphere is abuzz with Apple’s groundbreaking announcement yesterday of the new ability, in the beta version of iOS 11.3, to download lab results, allergies, “problem lists,” etc. from multiple hospitals. So far twelve hospitals have signed on as participants. You can read Apple’s announcement or search for it on Google.

[Edited for clarity & accuracy 1/30:] It’s a step in the right direction, but our Society for Participatory Medicine is about fully empowered patient-clinician partnerships, and this won’t do much to help: Apple says it “makes it easy for consumers to see their available medical data,” which ain’t much, nowhere near as “huge” as some are saying. What we really need is OpenNotes, which we’ve written about many times. SPM board member Peter Elias MD responded perfectly to CNBC’s @ChrissyFarr’s excited tweet:

If limited to Apple’s ecosystem it is an Apple product, not a healthcare product. And based on current info, the data set is tiny and helpful only to those with minimal needs.

Farr’s CNBC article says it “lets users download their health records, store them safely and show them to a doctor, caregiver or friend.” Well, no: the New York Times correctly said “automatically download and see parts of their medical records.” Specifically, Apple says it includes “allergies, conditions, immunizations, lab results, medications, procedures and vitals.” That’s useful but it’s the same paltry data set you can already see in your patient portal, which is no use if you’ve actually got a problem.

Coincidentally, last week [well before this announcement] SPM member Liz Salmi (a brain tumor patient) tweeted a perfect comparison – on the left is her doctor’s notes which she gets after making a special request to her physicians. Her point is that it would be much easier to get this detailed information if her health system were sharing notes:

I was interviewed about the Apple news late last night by the San Diego Union-Tribune on behalf of SPM, and said that while this is a step in the right direction, what people with a problem actually need is access to the whole medical record, not more of what little data we can already access in the portal:

“What Apple has announced is a strong positive step in the direction of democratizing health care. Knowledge is power, information is power and access to information increases a family’s ability to manage their own care,” deBronkart said.

He is among those asking not just for test results and medication lists but for access to the progress notes that doctors, nurses and other medical patients enter into the medical record with each and every visit. Patients, advocates argue, should get a chance to see what their providers write about them and check for accuracy. Too often, deBronkart said, many have spotted typos or erroneous information that could lead to harm.

“I know people who have discovered important errors that either caused or prevented death in their family members,” he said.

By the way, I’m sure it won’t be long before we hear users of this Apple product discovering errors even in the few data items this will offer. In my Google Health fiasco nine years ago I discovered that my condition list included all kinds of things that were years out of data. That’s a good thing – with luck users will then realize how important it is to be an active, engaged e-patient!