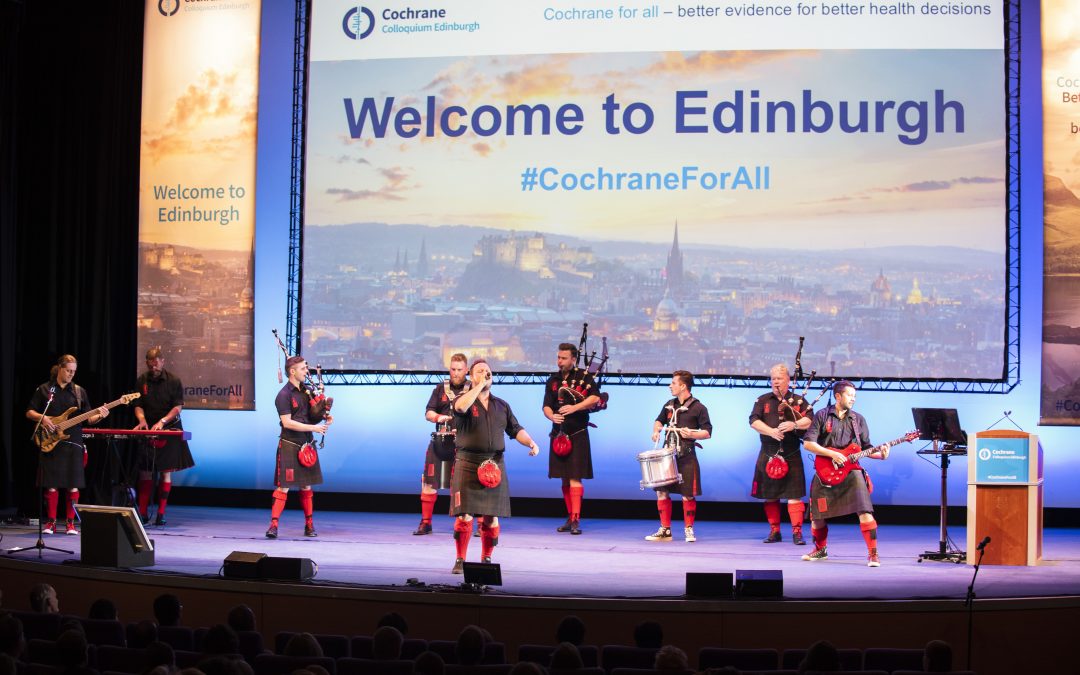 I won the big platinum #PatientsIncluded ring (much better than brass) this year with an opportunity to attend the Cochrane Colloquium, the global health science and health services research meeting that happens somewhere on Planet Earth every year. This year it was hosted by Cochrane UK, with the venue in the heart of Edinburgh, one of the best little cities in the world.

Since Cochrane UK was determined to sport the Patients Included badge, they started inviting people/patients from around the world to think about applying for a scholarship (in UK-ese, a bursary) when the starting gun fired in the spring of this year. They have a very effective Twitter presence, so I got pinged early. I volunteered to serve as an abstract reviewer, on the theory that every little bit (of contribution) helps, both for getting great content and demonstrating one’s enthusiasm for the project. When the application process opened, I was ready, and hit the “get a letter of recommendation from a Cochrane research group” daily double when Gordon Guyatt, the father of evidence based medicine in the 20th/21st centuries, and his entire MAGIC team wrote and signed my letter. THAT was a really good day around here!

When word arrived that I had been awarded a scholarship, there was also news that I’d won a couple of bonus rounds on travel assistance – one was a travel stipend from the Society for Participatory Medicine (thanks, guys!), and the other was being selected to be part of the Beyond The Room team for the conference. Here’s what that was about, directly from the Cochrane Colloquium page inviting applications:

“Also new this year is that we’re putting together a team to take the event #BeyondTheRoom. This digital conference service was started in 2016 by André Tomlin from the Mental Elf who saw an opportunity to increase the reach and impact of health events by live tweeting and podcasting from them, to involve people virtually and facilitate a much more democratic conversation. The #BeyondTheRoom team will include André and his colleague Douglas Badenoch, myself and Selena from Cochrane UK, and some new recruits – perhaps it could be you!”

Did someone say … podcast? Since I spent decades working as a broadcasting tech and producer, have produced podcasts for medical societies for the last decade, and started production on my own podcast “Healthcare Is HILARIOUS!” this year, this seemed like a dream gig. And it was. Not only was I able to fire on all cylinders when it came to my skill set, I got to do what I always loved doing while working as a journo all those years in TV news: talk to people doing really interesting stuff, and spread the word about what they’re doing.

Here are the pieces I produced, with links to listen and some notes on each one:

This is the first of a few posts about my Cochrane experience I’ll be putting up here. The next one will be a what’s-what on Cochrane in general, and all the amazing stuff they’re doing to break/fix that “it takes 17 years for 50% of clinicians to adopt new evidence in practice” thing.