Dr. Patti Brennan – #SPM2018 speaker preview “Supporting the Care Between the Care: The Role of the National Library of Medicine” 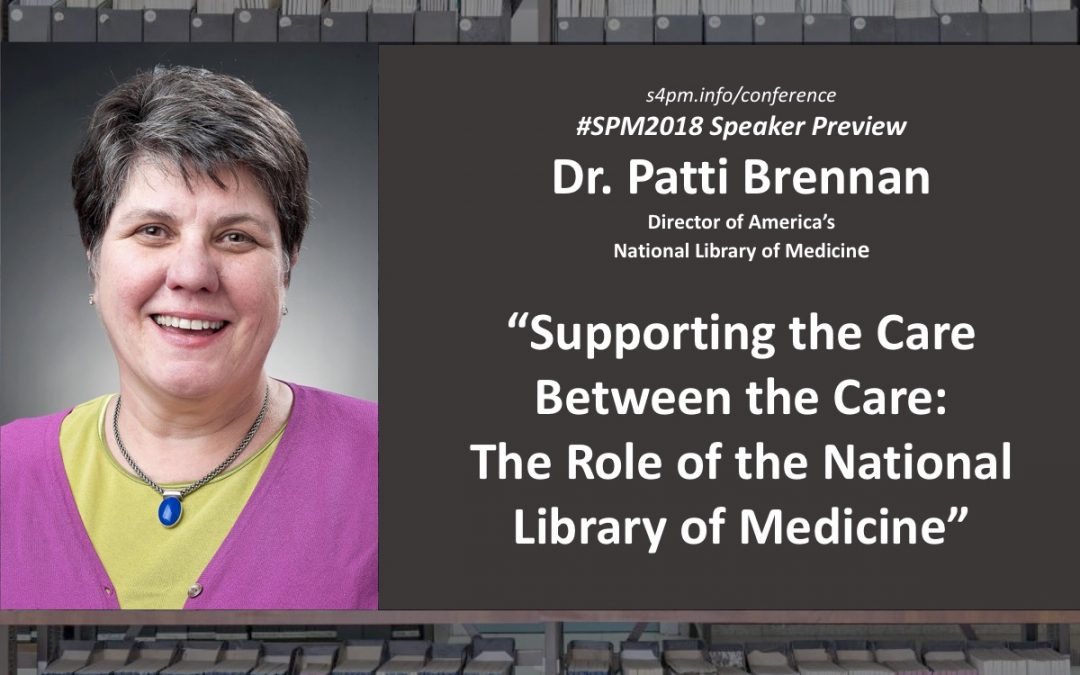 [Update: this post has been picked up and cross-posted on the widely read The Health Care Blog]

Here’s the latest in our series of posts by and about the outstanding speakers we’ve lined up for the Society for Participatory Medicine’s second annual conference on Oct. 17 in Boston, attached to the prestigious Connected Health conference. Register here. (Our #SPM2018 blog series has more about the speakers and activities.)

Since my earliest days in this work – even before our Society was formed – Dr. Patricia Flatley Brennan RN, PhD, FAAN, FACMI (or “Patti,” as she’s known to her many friends and fans) has been one of the most optimistic voices. She’s always been a dedicated, enlightened researcher, academic (at the University of Wisconsin, Madison) and voice of patient participation. On top of that, she was the director of the Robert Wood Johnson Foundation’s terrific Project HealthDesign: Rethinking the Power and Potential of Personal Health Records, which ran from 2006-2014, an absolutely pivotal period in the onset of personal health data. Patti knows that knowledge is power, and that patient power is naturally optimized when patient knowledge is optimized.

So you can imagine how thrilled I was when, in 2016, she was appointed the next Director of America’s National Library of Medicine (NLM). In addition to being extremely participatory, perhaps it’s no coincidence that she’s the first woman and the first nurse in the post.

In a moment I’ll say more about the history of this position, and its significance in the timeline that led to SPM. For now, consider this about her topic at our conference, “the care between the care,” particularly the NLM’s role.

In advocating to improve care, patient voices have often pointed out that the vast majority of the time in our lives, medically, is spent not in the hospital or the doctor’s office. “Doc Tom” Ferguson (1943-2006), progenitor of our society, wrote (back in the 1980s!) about medical self-care, whose impact depends on our skills and our knowledge. He published books and magazines on the subject, and in 1994 was medical editor of the Millennium Edition Whole Earth Catalog (the year browsers arrive), and just 18 months later published the book Health Online.

Just months before Health Online was published, Patti’s predecessor as NLM Director, Dr. Donald Lindberg, extended the reach of the Library by leading the creation of the indispensable literature search site PubMed, then PubMed Central.

The conference where Dr. Brennan will join us is titled Democratizing Healthcare. Can you see the beautiful synchronicity in Doc Tom and the NLM concurrently seeding that democratization by spreading both skills and knowledge? In 1994?

But there’s more to the connection, right there in the e-Patient White Paper (our founding document) (English PDF) (Spanish PDF):

Holy forehead-slapping crap: doctors don’t know everything??  At the time (2006) it was mind-blowing – and I can tell you first-hand, there are still a lot of people (patients and doctors) who think doctors should know everything and patients should stay offline and out of the way.

Witness the Washington Post’s horrific story last month of the “prominent Manhattan gynecologist” who chided, “Stop practicing Google medicine.” You might think “But that’s Google not the literature,” but I’ve heard exactly the same about patients searching the literature. The obsolete attitude is “Foolish patient, medicine is hard – stay out of my way.” And it costs lives, like that of 19 year old Bronte Doyne.

As we’ve long said, participatory medicine is a movement in which networked patients shift from being mere passengers to responsible drivers of their care. The drivers need knowledge, and that’s where the role of the NLM Director comes in. And that’s why it’s such a big deal to us that Patti Brennan is the one chosen to be the next one. Come hear her!

p.s. Here are two tweets on the “care between the care” theme by two SPM members, visually expressing the idea.

Learn more about SPM’s second annual conference on Oct. 17 in Boston or register here today ($100 for members/$150 for non-members). In our early years it’s priced as a great bargain for a full day. And see this blog’s #SPM2018 series for more about the speakers and activities.