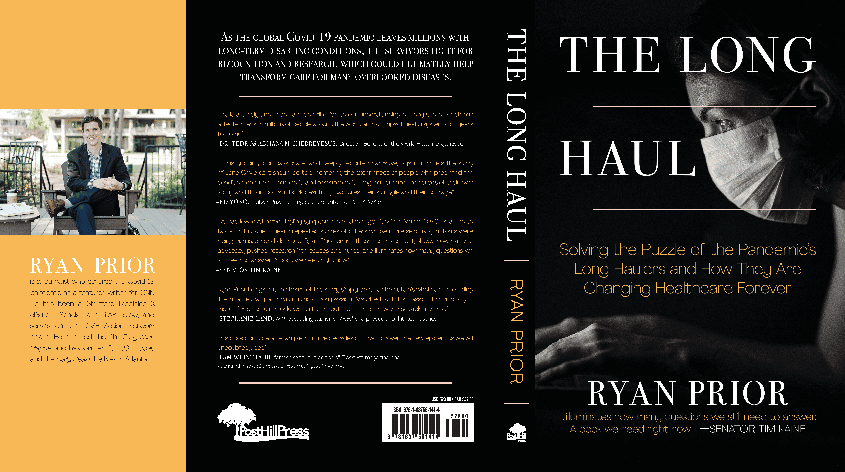 Editor’s note: In his new book, The Long Haul – Solving the Puzzle of the Pandemic’s Long Haulers and How They Are Changing Healthcare Forever, journalist and patient Ryan Prior depicts the courage of patients with Long COVID who were the first to name, research and endure the condition, which is a new face of much older post-viral syndromes. In this excerpt, Prior explains some of the recent history of online patient-led research pioneers, including Susannah Fox and Dr. Tom Ferguson, highlights how COVID-19 long haulers are the most cutting-edge example, and points to how their methods can be applied to 21st century public health challenges.

As COVID-19 tore through society and misinformation became rampant, Fox wondered if a digital health version of the Cajun Navy could activate in support of pandemic response, particularly with a citizen brigade who could help aid not just in disseminating accurate scientific information about the virus, but also in building tools to help patients track symptoms, pointing people in the right direction to get care, and even organizing the science themselves. Just as the Cajun Navy blurred the line between citizen and first responder, she thought there could be a similar model for tapping into people’s existing skill sets to enlist them directly in public health. In particular, those who had been infected themselves might have the most useful firsthand experience to offer others newly getting sick. The answer was in organic peer-to-peer health communities, and the Patient Led Research Collaborative was the most effective version she had ever seen.

Fox’s life story made her perfectly poised to understand the significance of what they had accomplished. A self-described “Internet geologist,” Fox was instrumental in creating the original website for US News and World Report in 1995, eventually working her way up to becoming its lead online editor. She then spent a decade and a half with the Pew Research Center, helping start its Internet and American Life Project focusing on health and technology.

Early in that role, around the turn of the millennium, she met Dr. Tom Ferguson, a Yale-trained physician who believed in the power of patients to contribute not just to their own well-being, but to scientific discovery as well. Though he had never practiced medicine, he wrote prolifically, serving as the medical editor of the counterculture magazine Whole Earth Catalog and representing a strain of self-sufficiency within the hippie movement. Its articles focused on how to build your own house, plant your own garden, and nurture your own health to prevent disease.

Once you were diagnosed with a serious disease, self-reliance became less possible because doctors had a huge information advantage in the days before the Internet. Ferguson championed a more equal doctor-patient relationship. He felt doctors ought to collaborate with patients, rather than command them. He coined the term “e-patient” to describe empowered or expert patients who didn’t just take greater control of their own healthcare but who actively built new platforms or communities or devices that could change the larger system.

Ferguson’s concepts would come to fuel the rest of Fox’s career. Her research leveraged the power of Pew’s research methodology to get a broad view of the national population. That data outlined details such as the number of households with Internet access or which types of people searched for health information online. She combined that with field work in which she interviewed members of early online patient communities.

“I would go into a certain patient community and spend time interviewing people, in order to stay in touch with what was being created, what was being built by these pioneers, by these rebels,” she told me. “They were often left out of the mainstream conversation about health care because they were living with something rare or life-changing.”

She got to know a host of digital health pioneers, including the founder of Psych Central, the first mental health website.

“I began generating reports focused on the evolution of the digital health culture and market every two years. And Tom [Ferguson] was my guide,” she told me. “What Tom taught me is that if you hang out with the cowboys and rebels and pioneers, you will see the future faster.”

Many of those people weren’t typical tech geeks. They plunged into online communities out of sheer desperation. Some of the most avid early adopters of technology were those who were trying to save their own lives or the lives of their children.

“I would learn from these radical patient communities, and I would bring that back and ask questions to start tracking the trends,” she said. “It’s through them that I saw the real future of healthcare, which is bringing it back into the home, allowing people who are kitchen table innovators to contribute to science and to contribute to medical and assistive device innovation.”

From The Long Haul Solving the Puzzle of the Pandemic’s Long Haulers and How They Are Changing Healthcare Forever, by Ryan Prior, published by Simon & Schuster, copyright © 2022. Reprinted by permission of the author.