Asked my opinion about how healthcare will evolve over the next, say, five years, I mostly answer that I pronounce the year 2.010 as “two-point-o-ten”.

In my honest opinion healthcare will start to migrate towards a more patient-centered model, and I think in a 2.0 way. I have tried to catch my thoughts in a little video below. It is the rough sketch of a posting I’m working on that is the follow up on my 15,000th tweet post.

The demographics are changing, as I also mentioned in my October video of healthcare in the Netherlands: [You can skip this if you remember it, but it’s worth a review -Dave]

The way patients act will change with the demographics. They will expect healthcare to be 24/7, they expect it to be on- & offline just like the internet: anytime, anywhere and most of all full of choices & options, from which patients and their caregivers will choose.

I think there will be evidence about the way youth is concentrating, I can see it in our own kids, they get more and more impulses, in a short period of time, make faster choices out of more options at a glance, and what’s most important: they will choose

Up until now (at least in the Netherlands) healthcare hasn’t really become a market. Sure there is some freedom of choice, but all institutions offer more or less the same. And in the rare occasion where a HC institution has something really special, they almost never talk about it other than in conferences, scientific literature, so … that’s still different from the way the “new” population of patients works its way though the bulk of information.

One way or another, once providers start talking about their different offerings, the freedom of choice will let this new generation “vote with their feet.” Remarkable to add is the difference in gender within social networks, although there are some myths about how the generation which will follow will use media as some research shows. 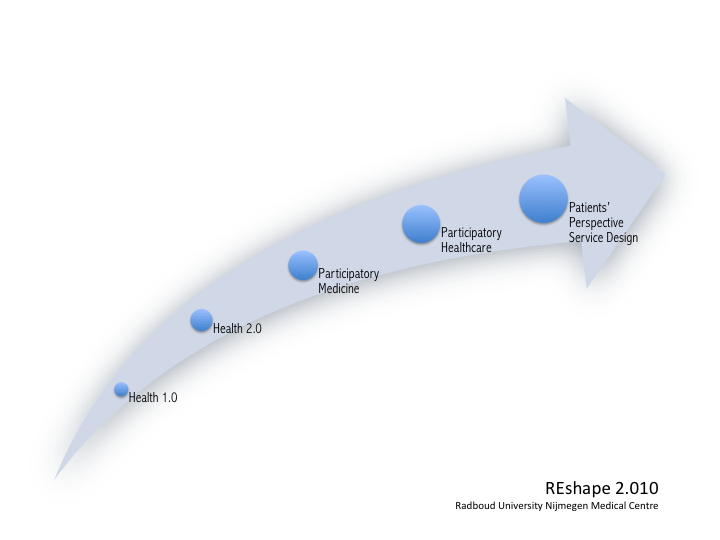 This development will lead HC into a different model I think, as shown in the graph above. Of course, whether the year 2.014 will be the correct one, and if it will be a Evolution rather than a Revolution is to be seen. The way HC will be REshaped from patients’ perspective will be a good “side effect.”