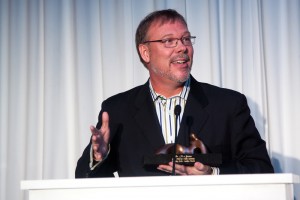 He did it without a budget – by leveraging social networks, of families and then physicians.

When patients and families alter the world’s conversations about a health issue, that’s participatory medicine at a whole new level.

The event was the Healthy Child, Healthy World Awards. “This year, our Prevention award goes to Dr. Greene for his “The WhiteOut Campaign,” which strives to prevent obesity by making real food—rather than processed white rice cereal-every baby’s first food.”

SPM co-founder Cheryl Greene, Executive Producer of DrGreene.com (and Alan’s wife), provided this text from a Medscape article last Thursday about the results of the before-and-after surveys:

Over 10,000 physicians, mostly pediatricians, took part in a July/August 2011 survey here on Medscape.com that demonstrated a dramatic change afoot in their feeding recommendations. The first question in the survey was “What do you recommend for baby’s first food (check all that apply)?” The options were white rice cereal, whole grain cereal, a vegetable, a fruit, egg yolk, meat, or other. Of those who answered as of August 31, the number one choice was white rice cereal – garnering nearly twice as many votes as the next most common.

This is unsurprising. White rice cereal has been the top source of solid food calories for babies for several decades and has commonly been recommended by physicians as the first food.

After reading an article about WhiteOut Now, our public service campaign to let every child’s first grain be a whole grain, and first food be a real food, the survey results were strikingly different.

Responding to, “What will you recommend for baby’s first food (check all that apply)” only 3% even included white rice cereal among their recommended choices. Physicians were also asked, “Do you think white rice cereal is the best choice for baby’s first food?” About 3% of those who responded had “No opinion” and an overwhelming 93% responded, “No.”

To me this major reversal suggests that the old white rice cereal recommendations were based on well-meaning habit rather than on science or even on careful consideration. When asked to reconsider, an overwhelming majority of physicians were quickly able to see advantages of abandoning the old recommendation.

Evidence is mounting that changing early feeding habits is critical to reversing the childhood obesity epidemic. The Medscape survey suggests that first feedings are poised to change. Good news indeed!

I am deeply humbled and honored by Healthy Child Healthy World award. What a fabulous organization!

How children eat changes how long they are likely to live.

How children eat changes their appearance.

How children eat can change their adult height.

How children eat changes how they think. In measurable ways like test scores and school performance.

How children eat changes how they feel. http://bit.ly/pA8OkR

How children eat changes the likelihood of getting a chronic condition like asthma or diabetes. http://bit.ly/oZ2rF5

How children eat changes how they behave. http://bit.ly/mRZXbj

The chemicals and synthetic ingredients alone in kids’ food can change how they look, think, feel and behave. http://bit.ly/q2D8Bo We’re standing hip deep in a childhood obesity epidemic: irrefutable visible evidence that how we feed kids is failing. Kids are built from food. They are what they eat.

An intrepid band of volunteers is trying to change this: end white rice cereal for babies. Join us.