Home » Medical Records » “I have a right to my damn data”: Hugo Campos in the Mercury News

“I have a right to my damn data”: Hugo Campos in the Mercury News

Well, SPM’s resident ICD patient is getting quite a lot of attention these days! First a feature in MIT Technology Review in November, then his TEDx video was released this month, leading to a spot on NPR’s On The Media on 1/20, and now he’s on the front page of Silicon Valley’s newspaper – a 900 word feature by Lisa Krieger on the front page of today’s San Jose Mercury News. It starts:

Man with defibrillator wants to know what his heart is saying 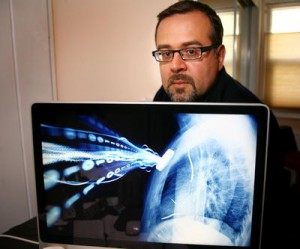 Hugo Campos has a small computer buried in his chest to help keep him alive. But he has no idea what it says about his faulty heart.

All the raw data it collects, especially any erratic rhythms it controls with shocks, goes directly to the manufacturer. And some of it later gets sent to his doctor.

But Campos had to step onto a national stage in his fight to see the data his body produces.

His David-and-Goliath campaign puts him on the leading edge of what’s called the “e-patient movement” — “engaged, equipped and enabled” — that seeks to harness data so patients can learn more about their bodies.

“It’s mine. I paid for it. It’s in my body,” asserts the tech-savvy 45-year-old, who since his sudden collapse at the Fruitvale BART station four years ago has devoted himself to studying cardiology textbooks, attending device symposiums and scheming how to access the electronics of his tiny defibrillator.

“I have a right to my own damn data,” he said. … (See Mercury News site for full text.)

What better place for this story to land than in Silicon Valley’s premier newspaper?  Several of us have been saying for ages that it’ll be great when innovators can pounce on medical data streams and do something innovative with them – especially, make those streams into something we ordinary mortals can understand. Have at it, fellow geeks! (And writer Krieger clearly gets it about the significance of data streams.)

Campos’ campaign has a professional supporter.

“It is embarrassing to leave our patients in the dark, by design or technological necessity,” wrote Dr. David Lee Scher in his blog. The former cardiac electrophysiologist founded DLS Healthcare Consulting, which advises digital health companies.

He cautions that the data is very technical, even for physicians, and often irrelevant. He urges patients and physicians to work together on a solution.

And that perfectly spotlights the participatory medicine aspect:

Our Society’s definition of participatory medicine, at the top of the website, begins: “…a movement in which networked patients shift from being mere passengers to being responsible drivers of their health…”  When you listen to Hugo’s TEDx and NPR pieces, it comes through loud and clear: that’s exactly what he and his ICD User Group want to do. Be responsible.

On a cultural note, the article says he wrote new lyrics to a Sixties protest song by Malvina Reynolds, “It Isn’t Nice” – and last summer he blogged a YouTube of it. The lyrics won’t win a prize for grace and meter, but hey, folks, this is folk music – vox populi – the voice of the people! Are you listening??

For the full lyrics, see his ICD User Group blog.

Do I hear a “power to the people” blowin’ in the wind?