Beginning a series: SPM members’ thoughts on the PCORI workshop

All: I’d like to collect a list of all blog posts about this PCORI weekend, from SPM members (our Society) and anyone else. Please write to blog@participatorymedicine.org, and disregard the auto-reply that you’ll get.
__________________

This post started as a prolog to Kelly Young’s upcoming post, but at some point a prolog needs to stand on its own.

Last weekend PCORI, the Patient Centered Outcomes Research Institute, held its first workshop on patient engagement in clinical research. It turned out to be a bold and, to some people (not everyone), sometimes a difficult endeavor. I think it’s important that we chronicle this transition, this cultural change – because that’s what it is: nothing less than a big-time cultural change. So everyone’s expectations about roles are subject to question and change.

We’ve posted before about PCORI. Since its creation in the Patient Protection and Affordable Care Act (PPACA, “Obamacare”) PCORI has had some rocky times as the research establishment earnestly tries to learn how to think like a patient and with patients, instead of thinking about or for patients. Sometimes, patients have responded in ways that basically mean “Are you even listening??? Do you even know what our lives are like???”

This is a gulf, and the best way to cross it is to get together, in person.

Much to PCORI’s credit, for this event they invited patients to apply to be in the room, and even paid for their participation – a first, to my knowledge. In comparison, two years ago when several of us in SPM testified about Meaningful Use regulations, any time we contributed was donated (unpaid time off work), which is really hard when someone is already sick or trying to recover financially from illness. That’s one of the massive disconnects between real patients and well-meaning but healthy (unstressed) researchers or policy people.

PCORI not only paid for travel, and paid for people’s time; they scheduled this two-day event on a weekend, so attending didn’t require taking two days off work (plus travel time). Never in my time working with people in Washington has anyone done that. Kudos, PCORI!  (And salaried PCORI staff donated their own weekends. Thank you!)

But then, the work started.

The central question, in my view:

I couldn’t attend – months earlier I’d been booked to be out of town – but on my own site I posted a question:  Who gets to say what’s patient-centered? (Hint: the one who’s IN the center). I said:

The maturing seems to parallel how a kid grows up:

My work on the advisory committee leading up to this event made me certain this was a key issue: for people inside the establishment, thinking about patients, it’s hard to imagine asking the patients themselves what they think is important. After all, research is about science, right? And who knows science better than scientists?

And that’s where it gets delicate: I think of the words of my primary physician, SPM co-founder and past president Dr. Danny Sands, who says: “I’m an expert in medicine, but patients are experts in their own bodies.” And, I would add, patients are the most experienced in defining what they think constitutes relief from suffering.

If we had an unlimited budget we could study anything, but we don’t. So, what should we study? Who should say?

What is, after all, a patient-centered outcome? Who gets to say?

The source of pain that surfaced this weekend

At least two SPM members who attended have already written about the weekend. Both felt absolutely stiff-armed at least once, as a moderator basically told them to stop taking the plan off track.

And to patient activists that’s a big problem, because although PCORI itself may not have “harmed” people yet (in this sense), everyone needs to realize that many many patients have indeed been stiff-armed too many times, told to be patient and polite, while healthcare has simply not gotten its act together and fixed the problems that keep killing patients, year after year.

(I’m fond of pointing out lately that at St. Joseph’s Hospital, in my town, during a relative’s hospitalization in December, I didn’t see a single employee wash his or her hands when entering or leaving the room, even though the patient had C.diff, a sometimes dangerous infection. And when I asked about hand washing I got a rude and ignorant response. Well, hospital, up yours. That’s how I feel: you’re dangerous, irresponsible, and uncaring. Who’s running this place?? Is that expected behavior and performance in your shop??)

And that’s not to mention the patients whose specialists have fired them for asking too many questions, or called them “Little Miss Type A Personality,” etc etc.

Everyone involved in this movement needs to realize how much pain some patients have endured. And it’s simply not acceptable to tell those people to sit down and be nice. There’s a whole lot of being heard that needs to happen first.

You may not have caused the problem, but the job you’ve taken on puts you in the front line, face to face with sufferers (and others).

Putting the weekend – and these blog posts – in perspective: the long view

Not everyone was happy about which patients got selected to attend, and not everyone who attended was happy with how it went. My personal opinion (not SPM’s) is that this is a sometimes-unpleasant natural stage of a culture change: it gets messy, and as I’ve been saying for years, it’s like teaching 8th-graders to dance: people step on each other’s feet. So as progress begins, some people get mad, some madder than others.

I hope all the parties will keep listening to each other and honestly expressing themselves. And I hope each will recognize that what looks like malice or rudeness may or may not be intended that way, and all will commit to the new world we’re trying to create. In this case that’s a blend of the best of the scientific method and culture, with the purifying addition of focusing on what the suffering people believe is most important.

As I say, PCORI leadership has given unprecedented support to patient participation. Patients, including unhappy ones, please realize this. I’ve met and talked with these leaders and they want the new world. But these are the clumsy days.

And PCORI leaders, Joe and Sue and everyone, please realize how much pain many patients bring, and that some may not realize yet that you are not their worst enemies, the worst of what they’ve faced. And it hurts when someone seems like the worst they’ve seen.

The work has begun. Let’s get to know each other and work together. As I say, this is our chance to bring together the best of what science has to offer and the improved focus the patient perspective can bring. This can be the fulfillment of the Affordable Care Act. 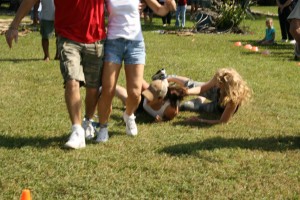 My personal opinion is that PCORi’s leaders are thinking right and moving in the right direction, but there’s a long way to go. I’m not asking for patience – I’m asking for understanding as we all commit to moving forward as fast as we can, together.

At one planning meeting someone suggested that an ice-breaker exercise could be to pair up researchers and patients in a three-legged race – nobody could win unless they figured out how to make progress together.

Do not suppress each other. Get to the future.

Posts submitted for this series: