Perhaps it’s time for an argument about how we’re doing this.

Many of us in the Society for Participatory Medicine have long noted that what we’re up to here is nothing less than full-bore culture change. In my own speeches I often note that culture is the set of shared beliefs about what’s possible and expectations about what’s appropriate behavior. And culture change ain’t easy, no matter how great your strategy is: many change agents have quoted the famous management consultant Peter Drucker’s line, “Culture eats strategy for breakfast.” (Google the phrase to see how often it’s cited.)

Predictably, arguments and even spitting contests break out about this: is change happening, or not? Is anyone doing anything that will make any difference, or not? Today one such dispute has shown up in our Journal of Participatory Medicine (JoPM): SPM board member Peter Elias MD has taken to task Paul Levy, the former CEO of Beth Israel Deaconess in Boston, who is very patient-oriented (but not a member of SPM). In January Paul posted Lightning Goes to Ground on his blog, asserting that something big is missing in patients’ efforts to truly change healthcare:

During most times, it is not a single leader who brings about change: It is a coalition of many local leaders who figure out how to join hands and bring persistent pressure on the body politic.  Until the patient advocates figure out a way to create that coalition, the lightning will go to ground in a manner that many of us will consider inequitable and inconsistent with the objectives of political stability and economic prosperity for all.

There’s a rich, robust set of comments on Paul’s post (starting here), including several from SPM members and friends. (I wrote one arguing about culture change, and punching back when Paul said TED Talks have not changed healthcare: “Of course not! Nothing big, nothing cultural, changes that fast,” the point being that this is no indictment of the work done so far.)

Peter’s new commentary today in JoPM flips the post title back at Paul. In his own article, also titled Lightning Goes to Ground, he notes that quote from Paul, and responds:

Though there is much in Levy’s column to agree with, I disagree strongly with this conclusion.

He praises much of what Paul says, then: (this is just a few snips of Peter’s detailed discussion)

He loses me, however, when he says the problem is that there is no organization “…that has devoted itself to the promotion of a vibrant, widespread patient advocacy movement.”

In my view, Levy’s excellent discussion misses the target because of these three misunderstandings:

Paternalism is not eliminated by changing parents. … Levy’s vision of an organized body representing patients and creating change on their behalf simply changes one form of in loco parentis for another. Paternalism will only be eliminated if we educate, empower and engage individual patients …

And What About the Society for Participatory Medicine?

Levy’s claim that there is no organization dedicated to creating a broad-based, vibrant, and effective patient advocacy movement is simply wrong. We exist and are hard at work. One such organization is called The Society for Participatory Medicine (SPM) … 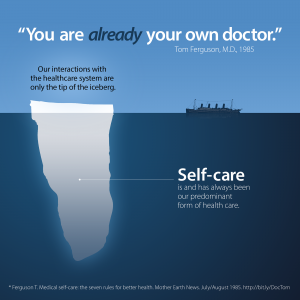 Peter’s concluding text begins, “Power rests not in an organization but in the autonomy and empowerment of its individual members.” Indeed, we’re even having disagreements within SPM about this: if you didn’t see it, go read our December post A Case for Autonomy & The End of Participatory Medicine, by our most famous member, heart patient Hugo Campos. (At right see the graphic he created for that article.)

What do you think? This is a social movement, no question, and as a child of the Sixties I’m strongly reminded of the fights (excuse me, “disagreements”) that broke out in movements back then.

Are we kidding ourselves? Is Paul right, and the hundreds of patient organizations need to form an umbrella group? Or, as some said in the Sixties (and Peter hints), does that lead to a new tyranny? How are we gonna make this change real?