Home » General » Benoit Bisson: Being a patient knows no boundaries

Benoit Bisson: Being a patient knows no boundaries 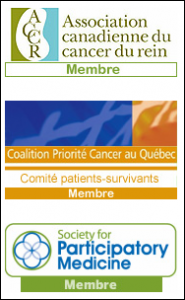 Guest blogger Benoit Bisson, a kidney cancer patient, journalist and SPM member in Montréal, offers an international perspective on the participatory medicine movement. He’s @Benoit_Bisson on Twitter; his blog is BenoitBisson.com. Guest post submissions are welcome from members of our society; instructions here.

As a cancer patient who has been navigating the healthcare system in the province of Quebec, in Canada, for more than six years, I was impressed when I saw how proactive patients were in the United States, particularly through the Society for Participatory Medicine.

The more time I spent reading through the posts on e-patients.net, the more I came to understand that much of that involvement by patients might well be generated by the healthcare system itself. In the US, nothing can be taken for granted as far as health is concerned: numerous players, numerous laws and plenty of different approaches on how to treat something. Faced with all that, the individual has to do a ton of homework if he/she wants to know about his/her condition, best treatment options, all info pertaining to costs, etc.

Here, in Quebec, the patient knows that he/she will be treated within a reasonable time frame, with the best of care available, without the financial burden it would entail south of the border. The social concept of healthcare for everyone is not one that tends to raise questions. In fact, I only started to have questions and becoming engaged when cancer hit. Why? Because I looked up information on what treatments were available, because some of those, although they were approved by Health Canada, were not approved by the Health Department in Quebec. Only then did I start to question the process. I contacted colleagues, who did articles about my story in the papers, about the fact that without those medications I would die.

I’m afraid that on a general scale, the fact that we are provided for as far as healthcare is concerned has made us much less prone to question the system. Sure, you hear regular complaints about wasted time in waiting rooms and overcrowded ERs, but that’s about it. Unless you are struck by disease, you don’t question the system. Rarely will anyone ask for his/her medical record, let alone think about having electronic access to it.

Hospitals are barely beginning to implement electronic records; the provincial government is still struggling to implement a health record that will basically only keep track of prescriptions. Forget about hospital records being online and accessible to patients, they’re not even totally implemented within the hospitals themselves! Getting back to the electronic health record, the only planned access for patients to their health record is getting a paper copy upon request, whenever the system finally gets implemented. Did anyone bring up online access for patients when the approval process was underway? Nope.

That reality, more than anything else, tells me that the Society for Participatory Medicine is very much in a position of leadership with regards to e-patients and participatory medicine. Even better, the US healthcare system has made American patients and health advocates much more aware of the need for changes to the system.

However, the reality of it is that patients in any system need to be empowered and engaged and I dearly hope that the SPM assumes that leadership that is much needed to spread the word — with things like the Seal Program being made global, not just limited to the US — involve patients from anywhere in the world, and help them bring about change. A patient is a patient, regardless of borders. What do you think?