Home » News & Gossip » SPM survey in Times Square: “Americans believe their medical data should be shared with their providers”

SPM survey in Times Square: “Americans believe their medical data should be shared with their providers” 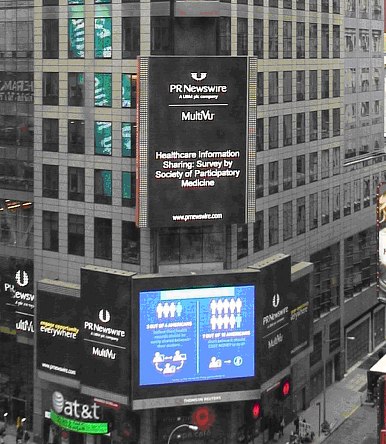 First paragraph updated next day
In case you missed it last month, there was an unprecedented, huge moment in SPM’s history – we collaborated in a national survey of Americans’ views and wants regarding something we at SPM hold dear: getting doctors to make full use of our chart data, by sharing it with other providers. SPM board member Donna Cryer @DCPatient and Danny Sands @DrDannySands collaborated with survey firm ORC International, and boy do the results say it: Americans want their medical data to be put to good use!

Back then we published a press release (below). Our survey partner ORC International also produced a gorgeous infographic (below), and hot diggety, it was picked up and published on the jumbotron in Times Square! (Photo, left. We also posted it on the SPM site, but haven’t blogged about it til now.)

There are some pretty stunning numbers in the survey results, and some pretty potent quotes.  I’ll highlight some of them below.

Enjoy – and tell friends and tell your legislators! (How often does a legislator see survey numbers like 75% and 87%??) Tell them: current business practices and federal policy are holding back what Americans overwhelmingly want:

The survey results and press release:

Nearly 75 percent of American adults surveyed believe it is very important that their critical health information should be easily shared between physicians, hospitals and other health care providers, according to a survey released today by the Society of Participatory Medicine and conducted by ORC International.

“What this survey points out is that when critical health information can’t be shared across medical practices and hospitals, patients are put at risk,” said Daniel Z. Sands, MD, MPH, co-founder and co-chair of the Society of Participatory Medicine and a practicing physician.

The survey also revealed that 87 percent of respondents are overwhelmingly against any fees being charged to either healthcare providers or patients for the transfer of critical health information.

Several independent sources have noted that doctors are forced to pay between $5,000 to $50,000 to set up connections allowing them to transmit information to blood and pathology laboratories, health information exchanges or governments. Sometimes additional fees are charged each time a doctor sends or receives data.(!!)

In addition, nearly 20% of Americans surveyed felt that they, or a family member, experienced a problem receiving medical care because their health records could not be shared between different healthcare providers. Yet according to a survey conducted by PriceWaterhouseCooper, 60% of providers face delays accessing current patient data and cited these limitations as a major barrier to effective use of health care information.

Dr. Sands went on to say, “We have the technology. What we need is for health care providers and systems developers to put patient interests ahead of business needs. None of them would exist were it not for the patients.”

Related: Q&A with Dr. Danny Z. Sands about the study

According to David Nash, MD, MBA, Founding Dean of the Jefferson School of Population Health, improving medical care in this country requires access to and use of data. Data from all of the different care settings will help provide a more comprehensive picture of a patient’s health and improve care across all sites. An open exchange of health information can provide access to “the right data at the right time so they can make the right decision,” Dr. Nash said.

The ORC International Telephone CARAVAN® survey conducted March 5-8, 2015.
The study was conducted using two probability samples: randomly selected landline telephone numbers and randomly selected mobile (cell) telephone numbers. The combined sample consists of 1,011 adults (18 years old and older) living in the continental United States (505 male, 506 female.) Of the 1,011 interviews, 509 were from the landline sample and 502 from the cell phone sample. The margin of error for the sample of 1,011 is +/- 3.08 at the 95% confidence level.

Surveys are collected by trained and supervised US based interviewers using ORC International’s computer assisted telephone interviewing (CATI) system. Final data is adjusted to consider the two sample frames and then weighted by age, gender, region, race/ethnicity and education to be proportionally representative of the US adult population.