How can we achieve shared work, connection, and communication? 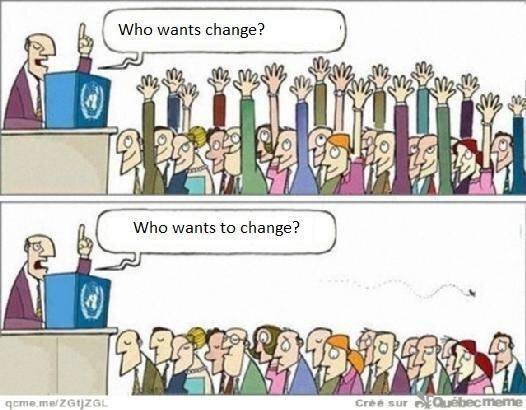 Translated from the French at Quebec Meme http://qcme.me/ZGtJZGL

Peter Elias MD is a member at large on SPM’s board of directors. He’s a primary care physician in Maine who, when I first met him at a speaking event, said he’s always practiced this way but didn’t know it had a name – participatory medicine. He’s active both in our member community and in our executive committee’s biweekly calls. This post candidly addresses the challenges our society has faced, lays some facts on the table, and calls for action, with a kind of partnership we have not yet achieved. – Dave

The challenge of maintaining connections and good communication between membership and leadership has come up periodically since I joined the Society for Participatory Medicine in 2010.  This is not unique to SPM, but is a universal issue for volunteer organizations. Where SPM is unique and stands out is its willingness to openly discuss this, and work collaboratively towards solutions. 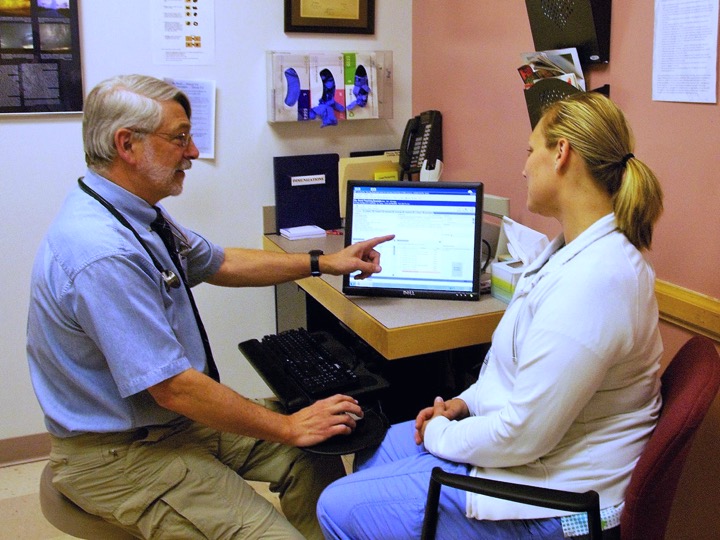 Peter Elias working with a patient. Photo from the SPM website participatorymedicine.org

I joined SPM to learn more about engaging patients in their care. I suspect my experience was not unusual: the member Listserv was where I met people, how I interacted, and it served as my window into the organization. As a new member, my focus was on specific issues and what I could learn from patients and other clinicians about engagement. I am still here, and still enthusiastic because of how much I learned and how many great people I met.

Over time I experienced frustrations. While I often learned from other members, it bothered me that the information I got through the Listserv quickly vanished and was not available to the next person with a similar need, because Listserv® archives are not easily browsable. I did not see a way to contribute information about resources or best practices in a way that would outlive the moment. Much of my frustration related to drawbacks of dependence on a Listserv as the only tool: content lost because the Subject line of a thread was not updated, a lack of continuity, conversations disappear over the horizon, inability to access an archive of previous conversations, lack of downloadable documents or updated materials. I have also been unhappy at the lack of a repository for tools, or a collection of user generated content.  Though I was only dimly aware that there was leadership, that was where I vaguely assigned blame. 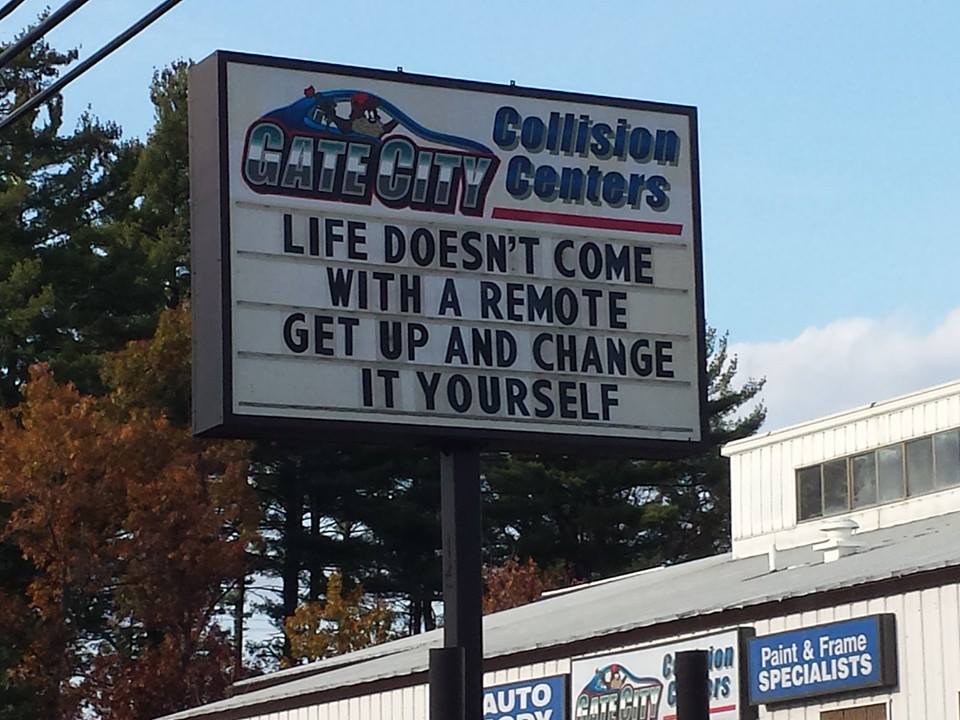 At some point I looked under the hood to see why the SPM machinery was not working as well as I wanted. What I saw under the hood was …  ME.  I decided to listen to my late father’s advice: when you see something wrong you have two choices, to shut up and move on because it can’t be fixed, or shut up and work on fixing it.

I precipitated recent discussions of this disconnect on both our Listserv and at the Executive Committee. (Both groups participated eagerly and actively.)

The purpose of this post is to turn those conversations, along with my observations over 5 years here, into a conversation starter about who we are, what we would like to be, and how to get from here to there.

While I believe there is a disconnect, I also believe that the disconnect has more to do with perspective and communication issues than substance or intent, and I think we can make things better. I don’t subscribe to the New England adage that you can’t get there from here.

Sir Edmund Hilary wisely observed that: “It is not the mountain we conquer, but ourselves.”  We, both membership and leadership, don’t just own this issue. We ARE this issue. It is ours to complain about, or to fix. We need to be the change we want to see.

The issues raised in the most recent discussions are not different from those raised in previous SPM discussions. They sort themselves into several themes, which can provide a framework for discussion and ongoing change.

Most of us came to SPM in response to an experience or problem related to the health or care of ourselves or our circle. Many of us stay focused on our personal and local concerns, the things that matter to us every day in managing our health or working with individual people to help them manage their health. This is a good thing, as Martha Stewart would say. Most successful change is local.  Some of us, either because of the work we do or as a result of our personal approach to life, like to spend time at 30,000 feet and enjoy solving problems on a large scale.  The people and conversation on the Listserv tend to be much more focused on personal and local issues, while the people and conversation at the leadership level tends to focus more on organizational and policy issues. This is a problem to the extent that we operate independently and invisibly without a mechanism to be part of each other’s consciousness. To use an American football analogy, the punter, defensive tackle and running back may need to spend much of their practice time doing job-specific work, but unless they also practice as members of their respective squads, their skills and effort will come to naught.

Theme 2: Who works for whom.

We are a membership organization. SPM does not exist as a natural phenomenon, separate and distinct from membership. We are not like rocks, trees or oceans that exist independent of humanity as part of the natural world. Our reason(s) for being, our strength (or weakness), and our accomplishments (or failures) are our membership.  If we think of ourselves as a car and decide to look under the hood at the engine and drive train, what we will see is…ourselves.

Theme 3: Infrastructure (or the lack thereof).

Many of us have experience with organizations that have a paid staff and a formal infrastructure including project managers, communication team, and budgets/staff for both projects and organizational management.  This does not describe SPM.  SPM leadership is not an officer corps with armaments and an army they command. Leadership consists of a small number of volunteers with no paid staff. If something needs to be done, someone has to be convinced to do it.  If something needs to be purchased, someone has to find a funding source. If a project is to be pursued, the planners and funding must be found and workers recruited.  None of this is automatic. It is difficult, and we should be both proud of how much we have been able to accomplish, and driven to do better.

Membership often fails to recognize that an issue or proposal raised on our Listserv will not automagically become an agenda item for leadership. There are at least two ways to make a proposal: enlist an individual member of the Executive Committee or Board to advocate for the proposal, or use the mechanism on the website.  In either case, though, proposals from members should be accompanied by a willingness to help plan, find funding, and recruit workers.

At the same time, leadership often feels that more could be accomplished with better funding, a dedicated staff and an inexhaustible supply of active member-workers. Our leadership team is frustrated that they can’t do everything themselves because they all have day jobs. That’s why they want members to step up—ideas are sexy and easy, but execution is what counts. They may lose sight of how much valuable and invisible SPM work is happening on the front line.

Both members and our leadership team need to remember that everything that has ever been done by “The SPM” has been member-led.

Members have too little awareness of what leadership is doing. This is a shame, because our SPM leaders are among the most active and dedicated I have ever seen in volunteer membership organizations. They meet every other week and publish their minutes on the SPM website. They engage with many issues and interact with other groups about issues of participatory medicine, so successfully that our name and endorsement are becoming sought after. The enormous amount of work and the many successes are not easily seen by membership.

Our leadership team finds the Listserv conversations disorganized and therefore hard to follow, tends to skim, reading only selected posts, and doesn’t often engage effectively on our Listserv about issues or proposals, offering specific information about how to turn the conversation into an actionable plan. Leadership does not go to where the membership is and engage them there. Leadership acts on behalf of the organization without a mechanism to ensure that the actions are what members would prioritize.

We experience the common ‘who knows what?’ issue. In addition to a lack of some of the resources membership would like, many members are not aware of what resources are available, how to find them, or how to ask about them.  Lots of information is available:

I should point out that, as a result of a member proposal, we are planning a video “Wireside Chat” to foster member-leadership dialog on Thursday November 19th at 4pm ET. Save the date.

I believe that membership’s concerns are valid, and have been heard and endorsed by leadership. As long as we divide ourselves into a members class and a leaders class, however, we will be trapped in a paradigm that is not suitable for a volunteer member-driven organization. We need to think of ourselves as all members, though with different areas of interest, different levels of energy, and different things to contribute. We are blessed to have what Harold Jarche calls a loose hierarchy of strong networks. Instead of an organization, we need to understand ourselves as what Etienne Wenger calls a collaborative community of practice. (See here and here.)

Here are some potential ‘action items’ culled from several years of both Listserv and Executive Committee conversations. Contribute to the change you want to see by using the comments function on the blog here to discuss these or suggest other items. Some of these are already under discussion or under development, but discussion here will help with priorities and focus. Whenever possible state how you would accomplish the task and whether you can lead the initiative.

In conclusion, our recognition of the challenges inherent in coordinating and harnessing our power as multiple unique but overlapping networks, and our willingness to work on this transparently, is a feature, not a bug.  We should be proud of how far we have come. And we should not hesitate to commit to doing better.

Peter Elias MD is on Twitter at @pheski. His occasional blog is at PeterEliasMD.com.